I probably took some 200 pictures and video yesterday alone (check out Twitter for a few - getting them from the iPhone to the iPad is going to take more time than I have with my 30 minutes of free Internet).
Yet, there are images I couldn't and didn't need to capture to never forget. Just as everyone told me, the vibrance, spirit and colour in India is phenomenal. Delhi itself is a very 'green' city. There are trees and parks and vegetation throughout much of the city which we've seen thus far. The bright colours of the roadside stands, selling fruits and vegetables, flowers, snacks and drinks echo those of the beautiful textiles and are a stark contrast to the grey cement and red brick buildings and dust which coats everything. I suspect there has been no rain here in sometime. Even the trees are dusty, and I can't help but wonder how the city looks after a rain. I suspect it sparkles and the air is fresh, not laden with a thick fog which smells of smoke.
In the two days we've been here, we've encountered nothing but kind and gracious people. Even in Old Delhi yesterday, when we went for a rickshaw tour through the market, I never felt uncomfortable with my surroundings. Granted, I did have a former rugby player join me, so I suspect this offered me extra security. It is also amazing to see how amid all the chaos, there is flow and it 'just works'. The rule of the road seems to be 'honk and go' and it appears there isn't a need to waste paint on lane markings because they aren't ever followed. Even with video, I don't know if I can really portray how insane the traffic is when you're in it, but I realized today it's best not to pay attention to the driving but that which is past the road.
Often, you don't have to look much farther than the roadside. These are also the images I will never forget, and the ones I couldn't capture. When I imagined India, I expected there to be people everywhere, sort of in the busy, New York street, shoulder-to-shoulder way. What I realize now is that it's not the volume of people but where they are that startles foreigners, like myself. Imagine people walking amongst vehicles during rush hour, children sitting on the median waiting to entertain or peddle electronic chargers or roses the next time the traffic halts, or women sweeping pebbles from the road onto the shoulder. You cannot drive through Delhi and avoid getting a glimpse of poverty, but I don't think you have to stray too far off the beaten 'tourist' path to really see it.
Today, we met with one of India's largest educational NGO's, and driving to their office (3 rooms in a residential apartment building with no signage) we gained a much better appreciation for the challenges facing India. There are those which we often think of but until you see infrastructure work being done literally by hand, like trenches for culverts being dug with a pick by ten men, you cannot appreciate what that means. Education will never be enough for the children in the street, unless you can also feed, shelter and protect them. This is a country where 1/4 of the population lives on less than 0.50 / day. A Pepsi here costs $1. Entrepreneurialism is a way of life here, because there is no other way for many.
It's hard to describe the feeling when you reflect on our Canadian lifestyle in comparison. I think it's too early into our journey to interpret or form any basis, but just seeing Delhi has provided more context than I'd have imagined. I likely will not have the opportunity to meet smallholder farmers this trip, but my appreciation for the challenges they face are heightened. Tomorrow we will see farmland when we travel to Agra to visit the Taj Mahal, and Friday, I plan to venture out to see first hand what buying food in India entails. I'm certain there will be a wealth of learning in this experience and hopefully I will have an update when I arrive in Mumbai later that evening. For now, I leave you. 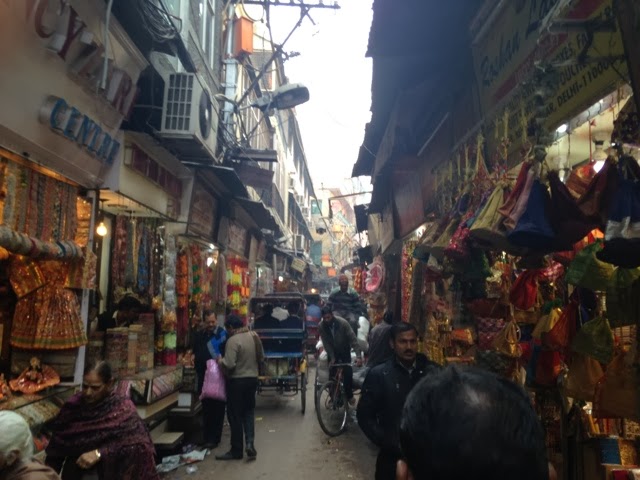 Exploring Old Delhi via rickshaw.
Posted by Savvy Farmgirl at 3:45 AM

Email ThisBlogThis!Share to TwitterShare to FacebookShare to Pinterest
Labels: Traveling