Head to Head: EZChicken vs PC "Free From" -

US sandwich chain, Panera Bread recently sparked controversy among farmers with their EZ Chicken campaign. The goal was to promote Panera's quality ingredients, by using the popular, yet meaningless descriptor of "natural" and  "antibiotic-free". Not really too controversial; the former has become commonplace on grocery store shelves today. It was the accompanying campaign which set off sparks. Focusing on the 'other chicken', it used some creative imagery and cheeky captions, which some go so far as to say, were fear mongering.

I've been thinking about this campaign since I saw the #pluckEZchicken reaction and Panera's response. I admire Carrie for going after Panera head-on, sticking up for farmers and challenging Panera on a campaign which is misleading. Not surprisingly, her crusade has been confused by some as an endorsement to pump meat full of drugs. I suspect those same people glazed over the farmers' explanation of how they responsibly use antibiotics only if absolutely needed. Unfortunately, as farmers we have to remember most consumers will not grant us the time to learn about all the intricacies of raising livestock for meat. There is a valid concern, which Panera (and Chipotle Grill) has so blantantly put out in the open. Remember this Marketplace? I digress, as a rant was not the objective of this post, but it begs you to question if the practices we've honed to grow livestock in fewer days should be considered acceptable in society.

Now, there was something else about this campaign that seemed all to familiar. Then I saw a President's Choice Free From pork commercial. Ah yes! The foundation of these promotional powerhouses' branded meat campaign are virtually the same. Of course, there are also key differences; specifically, Loblaws put the farmer front and centre, while Panera made colourful cartoons to degrade and even insinuate risk about the "other guys". 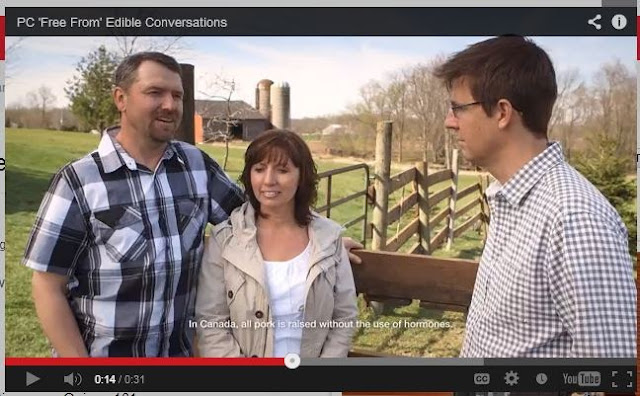 Both are big corporations completely committed to talking to consumers every day, all day, about their food and where it comes from. Surely, both are aware farmers are among the most trusted information source on this very topic? Farm and Food Care Ontario's recent Ipsos study found 61% of respondents ranked farmers as a favourable source for farming and food information, equal to family and friends. This rating was 15% higher than grocery and food retailers. I'm confident this is no surprise to Loblaws.

Afterall, to be fair, as farmers we might question what additional value these products really offer as there is an element of advertising smoke and mirrors here. We have strict Canadian advertising law to thank for the Loblaws disclaimer on their advertising and on-screen commercials. "In Canada, all pork is raised without the use of hormones." Hmm.. isn't that half the campaign?

As mentioned, we should ask why this is even marketing fodder. There is a segment willing to pay more for these products, and I can't knock Loblaws for recognizing this. More importantly, I think this campaign is solid because it's still positive.

Panera has broken the golden rule of sales, in my opinion. Never bash the competition. Smear campaigns have no place in advertising, unless of course it's politics, and even then the public is getting tired. Before you wonder, I am all for asking questions of our meat industries and encouraging reduced antibiotic use, but I have to agree with Dairy Carrie; leveraging fear tactics for profit is not cool. From a messaging perspective, I think the EZ Chicken is an epic fail. I'll be watching to see what the public decides; will any PR good PR for the EZ Chicken and Panera Bread?
Posted by Savvy Farmgirl at 5:10 AM