I'm not one to make resolutions. I have tried that in the past. Set goals and track progress. Truth is, if I can keep up with everything going on and make progress on the projects I already have on the go, I will be happy this year.

That being said, I do want to learn how to make infographics. Call it my non-resolution.

I'll explain more below, but first, let me introduce you to the Savvy Farmgirl Twitter-graphic. While the "0% interestingness" was a little depressing (who wants to be told they're not interesting), I've already changed by :l face into a 'geeky grin'. Visual.ly's interpretation does raise some questions; I don't even follow President Obama, much less feel I have a 'strong connection' with him. However, they did hit the foodie and wine obsession on the nose. Want to see your Twitter-graphic? Check it out for yourself.

Now more about info graphics and my quest to learn to make them.

I am very visual, so a good infographic can 'wow' me in seconds. Add some animation, like the Social Media Revolution and I am completely and totally floored. Isn't this really just a 2-minute infographic?  I think so.

The real motivation behind the sudden interest in design actually stems from work. In an effort to pull together four media plans and several different, but slightly related, data sets into a simple and comprehensible document, I found myself trying to create one, visually appealing slide that would tell the story of many. If only I could show this all in an infographic! I thought. And so the googling began. This is when I discovered Visual.ly and the Twitter graphic. Beyond showing people their Twitter personalities, imagine what kind of kick ass presentations you could do? Buh-bye Powerpoint (FINALLY)!!
Here is one you have all likely seen before (or something very similar): 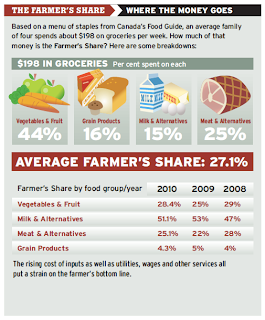 Finally, a quick Google search on food and 'eating' infographics made it clear who has jumped all over this medium. Of course, Peta was one of the first images that appeared. I was torn between posted the graphic or not. On one hand, I'd rather not send traffic their way. On the other hand, why bother reasoning with the unreasonable? One thing it certain, us agvocates and farmers have some catching up to do!
Best wishes in 2012!
Posted by Savvy Farmgirl at 7:52 PM