Custom Work - From the Other Perspective

I recall a conversation between my parents when I was growing up after we bought a combine. They were discussing whether to take on a neighbour's harvest job. My dad commented, "We have to pay for the combine somehow."
﻿
Fast forward fifteen years (if not more). We now farm significantly more land. We are by no means a big operator, but at 1500 acres, we are large in the neighbourhood. We farm 650% more land than we did back when my dad owned a John Deere 9400 and custom work helped pay the bills. We have more help, with both my parents, two brothers and one employee. We are also a lot busier, because there are now four families to support, rather than one.

Ten years ago, we grew hay, corn, wheat and 1-2 fields of soybeans. We also milked 40 cows. Today my family still grows those crops, but significantly more acres spread over more area. We also milk 50+ cows, one brother runs a custom spraying business and the other, a custom baling business. We press our own soybean oil and are actively trying to erect a grain elevator, now that a brand, new shed is complete. IT'S BUSY!

The phone also seems to ring more now with neighbours looking for someone to bale or combine, than it ever did ten years ago. Yesterday alone, one neighbour was here before anyone had even set foot in the barn for morning milking, another had stopped by after breakfast and yet another, called at lunch time.

We are all about helping neighbours. We have some great neighbours, and we work together to get everyone's crops in the ground and hay off the field before it rains. They will drive tractor for us or help unload straw bales, and we'll in turn bale or combine for them. The thing with custom work, there is only one combine or one baler and everyone's crop is ready at the same time. I enjoyed reading girl.meet.farm's post about haying for the first time, and they realized this exact same thing. They decided to buy their own baler and haybine off Kijiji. My brother would tell them they're brilliant.

Why don't more people do this? According to my brother, you can get anything off Kijiji for a deal, and wouldn't it be better to have the freedom to at least do your hay when it's ready? I was amazed this weekend by the number of people in our area that don't own any equipment. High commodity prices have encouraged "less-than-full-time" farmers to grow wheat and corn, without owning a single piece of equipment to plant or harvest it. Combines are expensive, I get it. What about dairy farmers that don't own a baler though? Is it worth begging your neighbours to the point of irritation, to come help? Good used balers do not cost that much. 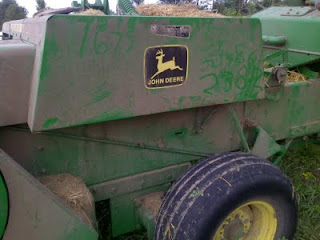 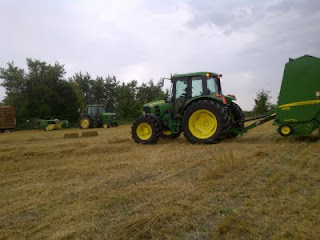 Maybe they also do not want to spend the time to run it or maintain the equipment? Maybe they don't think they can fix it when it breaks? Whatever the reason, it seems to be more popular in our neighbourhood just to call my dad.

This morning, we easily said no when we got a call. Two balers broke yesterday in two, separate, neighbours' fields. Nobody's baling can be done today. It's too humid to bale today anyway. It's also Sunday and the beach is a far better thing to do on Sunday, than fix equipment!
Posted by Savvy Farmgirl at 10:17 AM